Ended having to pull the monitor again to fix the sync issue. When I went to do that, the bent metal rod that encloses the flyback transformer fell out.. completely rusted in the middle. I followed this https://forums.arcade-museum.com/threads/u-bolt-on-my-k4600-flyback-broken.462981/ to get an idea of how to fabricate my own rod. The proper material, a vice, die tool and cutting oil got the job done.
https://twitter.com/Jizaboz/status/1326008251989848065
With that catastrophe out of the way, I replaced 2 caps that did not come in the original kit (filter cap for c621 and the big filter cap)  to hopefully make the k4600 monitor image quit randomly scrolling while ticking.
Alright! Then, I put everything together and fire it up. Within 5 minutes I see the ship sprites turn into blocks. Oh, no! 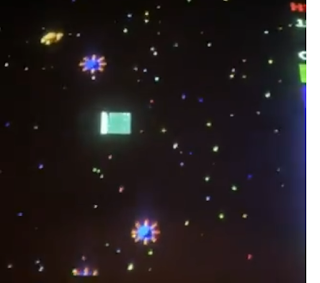 PCB issue of some sort? At this point, I remove the PCB again and hook it up to a workbench set up with a JAMMA adapter. Removed and set aside the outdated "filter board" (Whups, what was that still doing there?) and ensured again the edge of the board itself was clean with a fiberglass pencil and alcohol. Replaced/Rewired/re-pinned the edge connector that goes to the PCB edge.
Also, I was given advice over Twitter on that weird F 00003 error and apparently it was simply an odd dip switch setting! Always check for these things before wanting to start PCB surgery.
After being very busy with other things, Christmas Eve snuck up on me. I wanted to show the game my nephew after dinner. He played this game a lot on one of those cheap 4-1 arcade things you could buy from Dollar General and plug up to a TV via A/V cables when he was a little kid. Walked into the arcade room with with him and PCB, said "Here goes nothing" and plugged everything up after checking to ensuring 5.10v at power supply and PCB input.
Machine fired right up and finally played completely proper for half an hour. Got another hour or so on it since without any glitching. After a final cleaning and spinning the cabinet back around to line up with the other cabinets, I'm calling this one as done aside from getting a new lock for the back door and other minor aesthetics like re-gluing the t-molding in a couple of places. 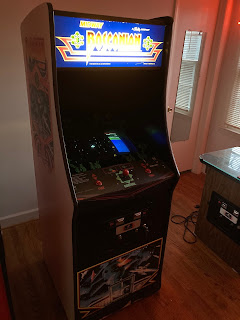 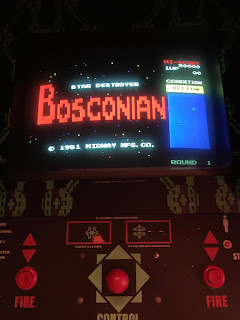