What Color is the Moon?

Making a new sci-fi game on the moon was something at first I thought would be fairly simple. I would only need a few rooms to simulate landing on the moon and walking into a base there. I would only need one or two NPCs. Of course, I was wrong. Timing and inventory issues are still a time-sucking hurdle to get over for my second IF. Trying to make the game very detailed, yet not annoying while reflecting those details is also a new practice for me.

As long as I can remember, the moon and outer space in general has always fascinated me. Growing up, I was intrigued by books on space and had the experience of going to Space Camp in Alabama when I was 11. At that point I started asking questions and wondering about things that I couldn't understand then. Some persist to this day, and it's always a relief to resolve them in my mind. However, I still have a question that persists as I write this game:

What color is lunar soil?

This isn't a question you can merely type into Google and get a definitive answer. In the 1960s before the manned Apollo missions, there were encyclopedias saying that the moon's soil was high in silica and other materials which would give it a slight orange appearance. Apollo camera footage makes it appear grey. I've seen many, many NASA slides of lunar rocks and soil. Usually the soil is consistently grey, yet I've seen different colors in some rock samples. I've posted a couple to show the general contrast. 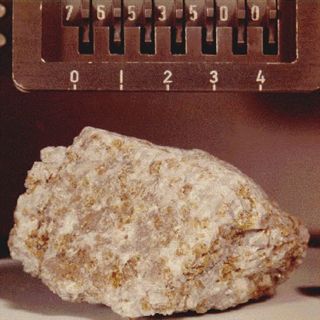 Apollo 14 rock
Also, how would the light photon physics of sunlight affect the appearance of the soil? I'm thinking that if the soil itself has a lot of reflective materials in it that it would sort of glow slightly like snow at night during a full moon. Even if it were grey this could happen, much like concrete dust. 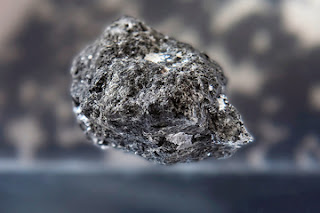 Apollo 17 rock
With the stars issue, I'm fairly certain that the light of the sun would drown out visuals of any other stars, though Earth and Venus should be visible. What really bothers me is the color, even though it will only be visible to the players in their heads after reading my description.

Hopefully I can decide on all of this soon. The story and puzzles of the game are completely planned. At least those are already laid out and for certain.
Posted by Jizaboz at 4:30 PM 6 comments: