Getting RunUO to work in Amazon Linux

I had run an Ultima Online server for quite some time on an old PC running Ubuntu Linux. Once I backed up all of the data from the shard and turned off that old box, I never got around to relaunching the server until this weekend.

Since I am already running an Amazon Linux instance for my website and a Quake II server that is very rarely used, I copied up my entire RunUO 2.0 folder backup to the server and got started. The first step is installing Mono.

I tried then starting the server and ran into errors regarding missing DLL files. This was fixed by using:

In the Scripts/Misc folder I had to update the address line in ServerList.cs to my new DNS as well as update any data paths (there are only a couple so long as you aren't using a lot of custom scripts with hard coded data paths) that it whined about when trying to start the server again.

At that point, it looked as if all was well. That as until I tried to walk into a moongate to transfer to another area. The server instantly crashed. In the terminal running the server, I see that it can't find a specific zlib version. I was able to find the version it was complaining about not seeing (zlib.so.1.2.3.4) here at http://zlib.net/fossils/ and compiling the file was simply a matter of "./configure" and "make". I then copied the compiled file to the /lib folder. At that point, everything was running smoothly! 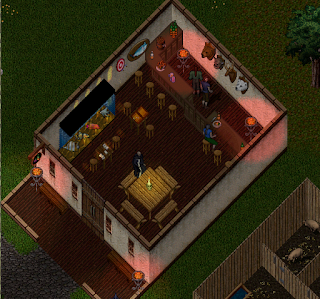 The old RetroShard website is back online at: retrolab.servebeer.com/lab/rs Leave a comment if you have any questions about the setup I've described. It's not very detailed but hopefully points out the main problems you may run into.