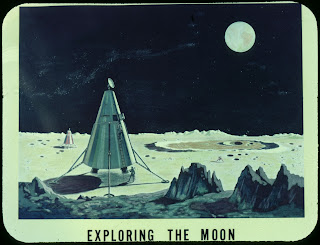 (old NASA public domain image)
About a week ago, I finally decided to give the Quest interactive fiction creation system a try. I think it's a fairly nice system. Creating a simple adventure in it is pretty easy. While thinking of a short "test story" to create within the system, I remembered an idea I had years back of a stage play of sorts I had thought up involving 2 astronauts stranded on another planet. After about two hours of fiddling with creating this in Quest, I decided that I could probably code the desired effect better and faster within Inform7. With that decision made, I ported all of my existing text into Inform7. I haven't completely abandoned Quest, but right now it just isn't a system that will suit what I'm trying to do any easier or more effective than I7.

Two other works of IF come to mind in this genre: Fragile Shells by Stephen Granade, and an old game called Stranded (a game with the same title was also released in 2001 about being on an island) and another game for Commadore 64 that I watched a play-though of on YouTube. Stranded is a very short game with graphics. It borrows a lot of concepts from the Dr. Who television series and has more rooms than I would want to implement for my own sci-fi IF. Fragile Shells is set in a space station and there isn't any NPC interaction (or graphics), instead relying on excellent descriptions and puzzles to move the game along.

The working title of this new sci-fi IF is "Stranded on the Moon", though that is subject to change. Although the setting is very desolate, NPC interaction should prevent the game from feeling too "empty". Along for this ill-fated journey is another astronaut named John, who may not handle a chaotic and isolated situation as well as you. There is a heavy theme of "what if" at play, as this is science fiction. What if man never set foot on the moon until the year 2050? Could the lethality of the lunar surface be underestimated? What else could be there waiting for us? I think such a setting would not only be fun to create, but also fun to play.

At this point I now have three interactive fiction works in progress. The new project, the "final version" of Hallow Eve, and my Interactive Dreaming project. I'm still set to release Hallow Eve by October 31, 2011 and I hope to get a couple of beta testers to try that out around October 15th. I plan on cramming a lot of work into that next week... as much of it is basically grunt work and bug-fixing. Interactive Dreaming contains quite a bit of media and is still in a experimental stage. I may be entering that into Spring Thing 2012. This new sci-fi game will also be a bit experimental but will also be very short. I hope to keep it in the Z5 (short, text only) standard. It will not be entered into any competition. Instead, I will just release it along with the source code when it is completed and tested.