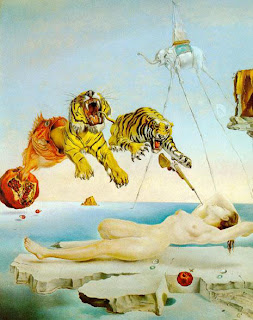 If you've ever had conversations with people about their dreams, you have probably noticed that while there are some common themes, many people dream differently. A lot of people will say something to the effect of "I know I have dreams, but I don't really remember them in the morning." Others may have such elaborate stories of their dreams that you may question them as to whether they actually had this dream, or if they sensationalized with their own imaginative story-telling.

It is my assumption that for most people, a dream is usually in 3rd person. The dream is presented almost like a movie to the dreamer. This movie is a rapidly-changing collage of sights, smells, feelings, tastes,  sounds that only your brain can bring you. I don't think that we will ever have a form of technology that allows us to accurately record and play back dreams. How many times has someone experienced what seemed like a horrible nightmare, only to feel a bit silly when trying to explain to someone else how terrifying it was to have a 2-ton toaster on giant chicken legs chase you down the street?

There is another form of dreaming which is the least common, called "lucid dreaming". If you didn't know, lucid dreaming is basically where the dreamer is aware that he or she is asleep and dreaming. Once the awareness is there, the dreamer then can begin actively participating in the dream or even change it. I frequently have these sort of dreams. I believe what started it was learning how to wake myself up as a child. Whenever a dream would get scary, I would tell myself to blink. After about the 3rd or 4th "dream blink", my actual eyes would blink, and I would wake up. As an adult, waking life can seem like the nightmare at times and dreams can sometimes be a wonderful escape, so I find myself doing the reverse; trying to keep from waking up. This can be hard once a dream goes lucid. It's as if soon after you realize that you are dreaming and really enjoying the pleasurable abstract mix of fantasy and reality, the dream tends to fade.

Dreams often inspire great writers to create worlds and the objects within them. I doubt that many of these are exact translations of the dreams themselves, because dreams can jump from one situation to another, or one part of the world to another days away, all in a matter of seconds. However, at least for me, repetition can flesh things out rather well. I often dream of certain cities or landscapes that I have never visited or even seen anywhere in my waking life, yet these places feel like actual locations in my mind. I can often revisit them. Sometimes I can return to a location and say something like "Oh hey, there is an awesome bar and arcade this way.." Sometimes I find it. Sometimes I get lost. Sometimes it's closed. There is an amusement park that I frequent, but for some reason it's always almost closing time. There are also the people or animals that I've  never met. I can't say that I've never seen them.. perhaps I have? With the hundreds of faces many of us see from day to day, it's hard to say whether or not these are also imprints from our waking lives.

How many of you have created something from a dream, in some attempt to share it with others? A painting, story, anything like that. The idea of creating a video game of some sort was always appealing to me. A scary, rusted old building with monstrosities and portals all about from a nightmare would seem like an ideal level to build in Radiant for Doom 3 or Prey. However, what about a pleasant dream about staring on a beach while gazing at an ocean with masses of tourists walking around? The Doom 3 engine doesn't seem like a good candidate. If you want both in the same game, it's not as if you could just switch over to the Crysis engine for the desired effect. In fact, trying to project many dream landscapes would be an extreme undertaking. Dream landscapes are extremely variant. In front of you may be the ocean, but to the left of you is a massive, dry and mountainous canyon. Behind you may be the door to your apartment.

I think that interactive fiction is the best medium to even attempt to start creating a "dream game". Take  Through The Looking Glass for example. There was a game created by Magnetic Scrolls called Wonderland that I felt was very true to the book and the weird, random things occurred fluidly. In contrast, years later when Alice came out, the game felt very empty to me. I've always been a fan of Id Software engines, but the Quake III engine just couldn't pull me into the game. Perhaps that's why the game was made the way it was.. it was a more "evil" version of Alice who ran around and slashed things with a butcher knife that could be much portrayed much easier than the Alice of Wonderland, who was occupied with solving strange puzzles in a strange and unpredictable world.

This is one reason why I'm very inspired to make my own attempt at a "dream game" using Inform 7. Rather than being one, huge "dream world" though, it will be a series of short-stories. Some locations will revisited, as well as some characters. I want the stories to be very free-form, completely removed from any constraints or expectations of both our conscious lives and traditional interactive fiction. That being said, I will probably begin experimenting with adding some two-dimensional graphics to help guide the player along his journey. If a worded description of a room is too bizarre, perhaps a few hours in GIMP to create a visual representation of it would be helpful? Dream worlds can be confusing, nonsensical places.. but  I do know which direction it is to that awesome Arcade Bar that only exists in my mind.
Posted by Jizaboz at 3:25 PM 2 comments: