I gave up producing for IF competitions over the past few years. While they were fun to enter, eventually work became way too time-consuming aside from wanting to spend more time playing games than writing them. However, in the meantime I've slowly been creating a new game in the Hugo engine I've mentioned a few times before titled Days in DPRK. 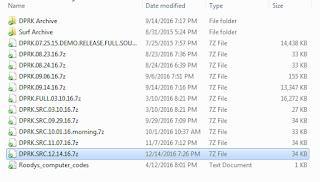 The making of Days in DPRK was motivated by both my fascination of  North Korean history  and the country itself, as well as wanting to move away from the Inform7 system and work more in Hugo. Hugo is not a "plain English" language like I7 is; it's more like "real programming" languages I've worked with before. After playing games like Cryptozookeeper by Robb Sherwin, I was really inspired to make my own creations in Hugo. This not to say I'm ruling out ever making anything in Inform again; I enjoyed creating games in it and enjoyed messing with the Canvas extensions to create the UI for the Interactive Dreaming prototype I was working on a few years back. Who knows, perhaps that will be re-visited one day.

DPRK is a bit like Lunar Base 1 in the respect that it tries to be a life simulation of sorts with commands thrown in to do things such as get out of a chair before moving. RoodyLib has helped to implement many things I wanted done in the game. Making things seem realistic in a room can be time-consuming, let alone in a game with many more rooms than LB1 and the concept of 3 playing characters that divide the game into thirds and connect to one another. This year, I hope and plan to finally tie it all together. Even after it is, there will be a quite a bit of  "polishing" to do on things such as setting/editing mood music/ambient sound for the remainder of the non-demo scenes, and editing Creative Commons images to suit my needs for the game.

Speaking of which, I look forward to people cooking here.. 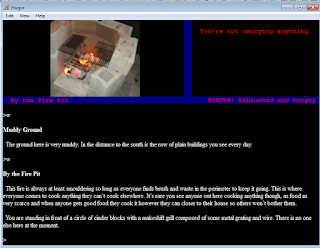