06.12.11 Note: I just heard back from someone with iFrotz. A new version has been released that addresses the missing elements, but the clicking on compass directions issue is still being addressed.

With two out of three of the games beaten that I mentioned in an older post, I have been working more on my new project in between my full-time job and playing some Cryptozookeeper. I'm trying to settle on a final layout so that I do not have to keep going back and changing things as I write the actual story code. I have it looking very close to what I want it to be when I'm done. I just need to add a few more buttons and make a few more minor changes.

Here is a screenshot of the new layout thus far, running in Gargoyle.. 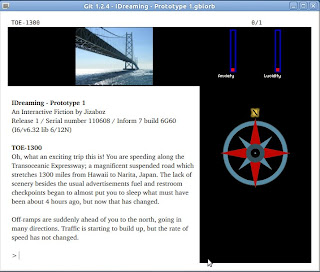 Both of the status bars have been re-sized and re-arranged to the right of the screen. The scenery picture has been centered a bit more over the story text. All elements of the UI draw correctly when re-sizing the interpreter window.
Owning a fancy Apple device would be nice (I'm not quite the Apple hater that I was back when I created Corporate Doom), but I simply can't afford just about anything recently made by the company. However, I am trying to ensure that the game plays well on Ipad and Iphone, because of the current popularity of such devices. Who knows? Maybe I'll own one myself one day. In the meantime, I must rely on others to test the game on these pricey platforms. Luckily, the tester that helped me trouble-shoot Hallow Eve owns a Mac and an iPad, and he has tested the prototype on both.
Here is the prototype loaded in Spatterlight for Mac.. 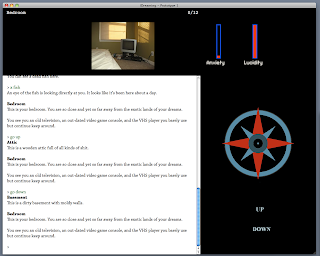 I'm satisfied with this. It looks exactly the way I expected and intended. Now let's see what it looks like in Zoom for Mac.. 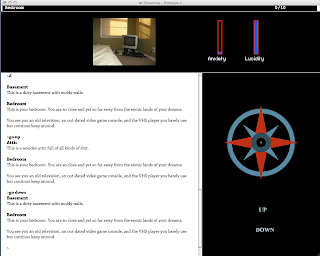 We have a line drawn here I've never seen before. However, it's in a non-annoying place, so I'm not bothered with it at all. This is fine.
One note the tester gave me was that in Zoom you have to double-click the compass directions to remove, while this only requires one click in Spatterlight. Again, no biggie. I can live with that. Alright, now something I was really curious about; the game loaded in iFrotz for iPad.. 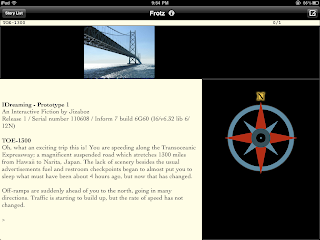 Uh-oh. That's not good. As you can see, my meters are missing in this version. It's as if iFrotz had no problem with displaying anything that displayed graphics from files, but it could not draw "primitive" words, boxes, or rectangles at all. The tester also reported to me that if he tried to use the compass to move in this version, it would start to bring up the virtual keyboard, then completely crash the system.
From what I understand, iFrotz is the only .gblorb interpreter for iPhone or iPad. I have read that glulx support in iFrotz is "still new and fragile", though I've also seen some recent updates. I'm going to point this out to the iFrotz bug-squashers in hopes that it will be addressed in the next update.
EDIT: As noted above,  iFrotz 1.5.3 addresses the graphics issue seen in a previous version. Now all I have to wait for is the action of clicking elements in the UI to perform functions to be working. Here's an image of the prototype running in 1.5.3... 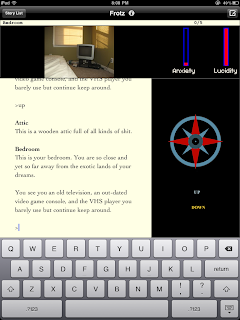 In the meantime, I'm going to carry on with the game as-is while testing in Gargoyle for Windows and Linux. Adding the last few UI elements, taking and adding more photographs for scenes, and setting up some more game mechanics. I've been writing the story and plot themselves separately in a word processor, instead of just jumping in head-first as I did with Hallow Eve. I welcome any recommendations, comments, or criticisms any of you reading this may have.
Posted by Jizaboz at 1:04 PM 1 comment: