About 20 years ago, I purchased a NEC Turbo Duo console from a now-closed store called "It's about games." I asked about Turbo Grafx stuff as at the time I think I still had a Turbo Express handheld system (It was later stolen along with my Splatterhouse and Bonk's Revenge Hu-Cards). An employee there mentioned he had a Turbo Duo still in the box with everything that came with it, and that he hated it and wanted 50$ for it. I instantly took him up on the deal.

The system played well for years. I joined a group called R.I.G.G. (Retro ISO Gaming Guild) and learned the ways of ripping and burning CD games for the system. Eventually CD games that required a lot of loading such as Sherlock Holmes: Consulting Detective would hang/crash and I tossed a lot of those burned copies and put the system up for a few years.

When I brought the system back out I could tell immediately there were audio issues. I could barely hear anything and what I heard was crackling. There were numerous posts on the Internet about this and it was quickly determined that I needed to order a cap kit because the surface mounted capacitors fail after a few years and to make it even better.. they leak acid all over the PCB which can ruin circuit traces. In my case, I was fairly lucky that there was not a lot of leakage but there definitely was some visible underneath nearly every original cap as I removed them. I had a bit of trial and error along the way because while I have quite a bit of soldering experience, I've never done any surface-mount soldering. Below are a few pointers I learned along the way, along with my list of capacitors replaced. Note how much larger the last couple of batches are! Once I had some practice and knew how to properly prep, things went much smoother and faster.

Some will probably disagree with how safe this is, but for me I never lifted a trace. I simply took needle-nose pliers and GENTLY rocked the capacitor back and forth and side-to side a few times each. Once it started feeling loose I would put the pliers down and use my thumb to gently rock the capacitor some more in a circular motion and it would just fall off. If some of the legs of the old capacitor are left on the solder pads, you can carefully cut them with wire-cutters though some people leave them as an additional bit of metal for new solder to stick to.

This is extremely important. You need to clean the pad and all around the area of the pad to ensure any residue left over is removed. I used q-tips and 93% rubbing alcohol. Clean each area repeatedly until there's nothing black or yellow left on the q-tip. If the pad is really dirty (won't get shiny) then you will need to use a fiberglass pen gently on the pad to basically "scrape" any hard stuff off, then hit it with q-tips and alcohol again. If your surfaces aren't completely clean, the solder WILL NOT stick to the pad! Also, there are two op amps near the audio sections of the PCB. They are black with 8 metal legs and have the code "4558" stamped on them. If you've had bad leakage you will have to get those off and clean underneath them. In my case I didn't see any signs of corrosion near them on top or underneath the board itself; so I soaked both pretty good in alcohol, wiped them off and only saw very light yellowing, then let them dry.

You will need to bend each leg of the capacitor about 1/4 of an inch from the top outward, then trim the legs, essentially making little "feet" that will stand flush on the soldering pads. You can use the diagram and list here https://console5.com/wiki/Turbo_Duo to plan out which capacitors to replace and where they go. I also ordered my capacitor kit from console5, but these days you can probably get more high-quality capacitors. In my opinion I don't really care because I know what's in that kit is miles better than the old caps. I recommend making a little list of your own per each "batch" of capacitors you intend on replacing so you can check them off as you go.

Pay VERY close attention to polarity! Out of the 39 capacitors I swapped, I discovered I had one backwards which is a first for me on any soldering job. Good thing I caught it before I turned it on too because that could have seriously messed something up! The stripe on the capacitor marks the negative side. Do not trust the + marks on the PCB completely as it gets confusing when there are a lot in a cluster. Always confirm uF. voltage, and polarity of your replacement by checking the diagram in the link above! While voltage isn't as important; the general rule is that higher voltage will work, but not the reverse. Also, uF must be EXACT. So say if you need 6v 22uf, you can safely use a 10v 22uf, but you can not use something lower than 6 volts.

I used a soldering iron picked up from Radio Shack years back. Certainly nothing special. It is adjustable to 15 watt or 30 watt. You'll obviously want to use a small, thin tip on your iron as this stuff is tiny. I used 15 watt (and you'll probably want to as well) because I wanted to be extra careful not to burn anything up. At one time early on I briefly used 30 watt and things just didn't want to "stick" properly. I recommend you have both solder wick and a solder sucker for cleaning up any old solder or to clean up any you accidentally may drip on a resistor or whatever. The best method I found was basically applying a little drop on each pad then waiting for it to cool, then gently touch it with my finger to ensure it's properly bonded. Then I would take my prepared new capacitor in my left hand and heat the solder drop for about half a second as I sunk the leg into the drop then quickly pulled away to solder iron. Wait for it to cool, then give it one last little wiggle to ensure it's not going anywhere.

It's not a bad idea to do a test after each batch of capacitors just in case something weird happens latter it will help you narrow down what went wrong. Make sure the the black and white wires are still soldered to the metal place that covers the middle of the PCB. Again, check your polarity! Ensure nothing is backwards every time before powering on.

Doing multiple tests actually helped me solve an audio issue that popped up after I thought I was done! The first batch I did included c604 and c610. Those op amps I mentioned earlier pass through these. My first test after that batch brought back my audio loud and clear.. but after the total job was done I eventually discovered I only had the left channel of sound when using my AV cable (stereo worked fine through headphone jack). I was scratching my head and then remembered I had to bend a couple of caps to expose a screw. Sure enough, it was c610 and c604 and one leg of c604 had come loose. Probably because I wasn't cleaning/prepping as well as I should have been on that first batch! I hit the leg with more solder, wiggled it to make sure it's tight, fire the console back up and shazam, both audio channels working.

I found this project to be very time-consuming and honestly hope I never have to mess with surface-mounted capacitors again.. though that's probably inevitable. It took me nearly 2 years to get around to completing but that's mainly due to being busy with work and getting into other repairs that were more high-priority to me. However, I learned a bit along the way and the experience was very rewarding. Aside from the fact the first batch basically fixed my audio issue, with every batch afterwards I could see things like new colors popping up in Neutopia that I either forgot were there. Once complete, the audio is clear with no buzzing. The graphics are bright, crisp, and colorful. It almost feels like playing brand new system.

I have not yet replaced the non-surface-mounted capacitors and they do not show signs of leakage yet. From what I've seen in arcade repairs, those could last a few more years so I'll just keep an eye on them for now and if something fails they'll be the first culprit. I also have not replaced the save game component but I have the part if save games start vanishing.

I also have not addressed the CD-ROM yet. That will be next! As of now it just spins when trying to load an audio CD. First step will be trying to adjust the existing laser now that the capacitors have been replaced. 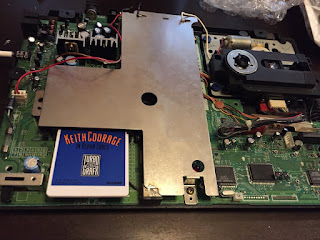